This was recently brought to my attention, via Facebook: 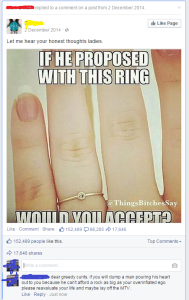 The original caption with the photo reads: “Let me hear your honest thoughts ladies.” This was originally posted in December 2014.

Amid those 66,000+ comments – I know it’s hard to read – the comment directly underneath the photo reads:

“dear greedy cunts, if you will dump a man pouring his heart out to you because he can’t afford a rock as big as your overinflated ego please reevaluate your life and maybe lay off the MTV.”

When The Tasteless Gentleman re-posted it on January 6th, their caption was:

“this shouldn’t even be a question.”

A friend put it this way:

“and I think it’s fucking stupid really. If the man truly loves you and can only afford a small ring at the moment, and you say, ‘That’s it?’, then honey you saying no will be the best thing you ever did for him, cuz [sic] clearly you don’t deserve him.”

Precisely! I don’t think I could have said it better.

However, with that said, I will also share my honest thoughts.

I mean, this is a “commentary” post, after all.

Engagement rings, in general, are wonderful. They’re beautiful. They’re unique to each and every girl/woman. I’ve seen many beautiful rings on the left hands of many friends, family members, and other women in my life.

However, did you know that the “tradition” of the diamond engagement ring is actually relatively new? Because of  the De Beers company and their crafty ad agency, in the early 1900s, they created a brilliant marketing campaign aimed at men in the U.S. – Diamonds are valuable, and giving your woman a beautiful diamond ring matters.

It was fascinating to learn about – Here’s one blog post about it.

With all that said, I don’t believe that it’s necessary to give your girl/woman an engagement ring.

When Al’s parents decided to get married years ago, Al’s mom told his dad that she didn’t want a ring – They didn’t have a lot of money to begin with. What she really wanted, more than anything in this world, was this particular set of pots and pans. So that’s what Al’s dad did!

I was shocked when she first told me that story several years ago, but I love it. It is so unique! She’s not a jewelry person, anyway!

Also, to the women who value the ring and the size of said ring over the main point … Fuck off. Fuck you. That’s ridiculous. That is pure bullshit. I give you both my middle fingers.

That, right there, is basically the definition of being materialistic. And that is incredibly sad.

The main point, of course, is seeing your man (You know, that one, the one you’ve presumably devoted a good bit of your time/love/energy/effort to, whether it be a few months or several years or maybe you even had a child with him before this moment) down on one knee, asking you one of the biggest questions EVER.

If you’re that superficial, to claim that the size of the ring matters MORE than your man AND his love for you … What the hell.

I absolutely adore my engagement ring. Al let me pick out what I wanted, even after I offered to him, came right out and told him that I put my full trust in him to pick one out for me.

I look at it – Find myself/ catch myself staring at it, a lot – falling more in love with it, and the man who gave it to me, every single day.

At the same time, I’ve heard several stories of men who want to give their wives better rings. Someone I know wants to give his wife a bigger, better ring for their 10-year anniversary, a few years from now. To me, it’s so sweet and thoughtful that he wants to basically re-propose to her, knowing that the ring he had to originally proposed marriage was bought with limited money. Now, years later, they’ve grown in their careers to have better things. That’s awesome to me, and it shows how much he loves her and wants to give her what she deserves, in his mind.

But back to the original point. The same friend asked me what I would do if Al had held up a box with a ring like in the first picture – Would I say yes?

“Absolutely. Without question, without hesitation.”

It’s not about the ring, not at all. It’s because I love Al. He is amazing. He is a wonderful man, a man that I have dreamed of marrying, and having children with, and building a life together for several years now. I’m beyond excited to know that in less than five months, that dream will fucking finally become reality. And I can’t fucking wait. The ring on my left hand is a symbol of our love together, but I know, 100 percent, that I would be just as much in love with him and excited to marry him on November 14th if it were smaller. I would never turn him down, ever.

Even if Al couldn’t have afforded a ring at the time he wanted to propose, I still would have said yes, no matter what. Without question, without hesitation.