For some odd reason, I’ve been fascinated by the Vietnam War time period for many years. It started around middle school, when I read the Dear America and My Name is America books based in the late 1960s:

Both of those books were written by Ellen Emerson White. In high school, I read another of her books focusing on that time period, a young adult (YA) book called The Road Home (1995).

I also remember studying the Vietnam War in depth in my 20th Century History class as a senior in high school. In addition to history class, I gave a presentation on Woodstock for my Theory of Knowledge (ToK) class.

Maybe it’s because that was the time that my parents were in college and told me various stories over the years. No one in my family was involved in the combat or action, but I’ve read many books and done a lot of research about the war, and the U.S. involvement.

All that said, I can’t remember when I was first introduced to Tim O’Brien and his books. I think it was Dr. Lynch’s ENGL 150 class when I was a freshman in college. Regardless, as soon as I started reading, I was a fan.

Born in Austin, Minnesota, O’Brien had a younger brother and sister. At the age of ten, O’Brien’s family moved to Worthington, Minnesota. The move greatly influenced his writing, and he uses Lake Okabena in his book The Things They Carried (1990).

O’Brien earned a bachelor’s degree in political science in 1968. The same year, he was drafted into the Army and sent to Vietnam, serving there from 1969 to 1970. In 1968, the unit he was assigned was involved in the now-infamous My Lai Massacre.

After his tour in Vietnam, O’Brien started graduate school at Harvard University, and received an internship with The Washington Post. In 1973, he published his first work, his memoir of his experiences in Vietnam, titled If I Die in a Combat Zone, Box Me Up and Ship Me Home.

Since 1973, he’s published eight other works. His most recent publication was released in 2002.

In the present day, O’Brien lives and writes in central Texas. He’s married and has two sons. He teaches full-time every other year at Texas State University-San Marcos. When he’s not teaching full-time, he teaches workshops to MFA students in the creative writing program.

He has been recognized with several honors and awards. Most recently, he received the $100,000 Pritzker Military Library Literature Award, in June 2013.

This is the book I remember reading at Longwood. It left such an impression on me for a long time. Cacciato is a member of Paul Berlin’s squad in Vietnam who goes absent without leave (AWOL), trying to get to France.

Critics and readers alike have marveled at O’Brien’s ability to blur reality and fiction, also known as verisimilitude. I think we read this in Dr. Lynch’s class, my very first semester in college, and the discussions we had were just incredible.

I didn’t read this collection of short stories for any class (I don’t think so, anyway), but writing this post has inspired me to put it on my TBR. This is where O’Brien use of verisimilitude shines. 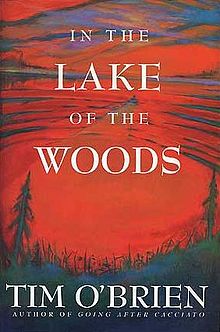 Inspired by O’Brien’s upbringing in Minnesota, this book combines drama, mystery, war, and politics. This is also going on my TBR!

I don’t know what it is about class reunions, but whenever that particular topic is explored, I find myself intrigued. This novel is set in 2000, focusing on the delayed 30-year reunion of the class of 1969. This is also going on my TBR!

What about you? Have you read anything by Tim O’Brien?

Come back next month for another installment of Awesome Authors!