So, before starting the lists of favorites, here’s my tally for books and Book Reviews for 2019:

Now, on to my favorites!

Well, that wraps up my favorite things for 2019!

What about you? What were some of your favorite things of the year?

Thanks to my friend Hannah for posting the trailer on Facebook recently. I hadn’t heard of this movie until I watched the trailer. I cried.

I finally sat down and watched it last night. What a powerful, emotional movie.

The tag line reads, in part, “based on a million true stories,” and that’s so true.

Although it’s been a few years since it was released, it’s still so sadly relevant.

As I started watching, I immediately thought of a young man named Alex, who died by suicide when he was a freshman at Oscar Smith. He was 14-years-old. He had just started the IB program. I didn’t know him at all, but I felt compelled to go to his funeral. I didn’t know his story, but I wanted to be there for his family, and the IB family.

As the movie progressed, I thought about the other people I knew who have died by suicide. Not necessarily from bullying, but other circumstances. The most poignant bullying tragedy was Nick L’Hoste. He was only 12 when he died. It sent shockwaves through our schools, and especially our church. He was only a year younger than me. It’s hard to believe he would have turned 30 this year.

This movie makes me incredibly grateful I didn’t have the access to the far reaches of the Internet when I was in high school. But, it’s still sobering. Bullying has expanded to online and offline, and it’s so sad.

The other lesson I learned is that no one should be afraid to ask for help, whether you’re the victim or the bully. It’s a bit of a contradiction, so let me explain.

When I was younger, I was taunted and teased. I wasn’t classically “bullied.” I never considered suicide as an option or a way out.

However, when I brought up instances on the school bus and in the classroom, my parents typically said, “Oh, if it’s a boy, it’s just because he likes you.” I’ve NEVER liked that phrase, nor did I believe it was true. I’m writing another blog post about that – More to come.

But that’s not my point. Kids, regardless of their age, should be able to go to their parents, or any trusted adult, with their problems and struggles. They shouldn’t be dismissed or brushed off. They need to be believed.

Also, if they don’t want to talk about it right away, that’s perfectly fine. They need to feel like they’re being heard, and that’s huge!

And, the bullies need as much help as the victims. I’m glad the movie showed both perspectives. By the end of the movie, it was painfully obvious how much Avery was dealing with, and she felt like she had no one to turn to.

I appreciate what the principal said about there being two sides to every story. That’s absolutely true.

However, bullying is still incredibly complicated! Jessica was targeted in multiple ways – In person, physical abuse, text messages, emails, social media posts, and more. It gutted me to watch it all unfold.

I cried multiple times. I wasn’t particularly thrilled with the ending, but I understand why it was framed that way. The point is the movie as a whole, not necessarily how it ends.

I applaud Amy S. Weber for making this movie. I think many more people need to see it. I was able to find it on Amazon Prime Video for free. And I will likely watch it again. It’s a good reminder to be kind, and recognize that you probably have no idea what someone is going through.

So, thank you, Hannah. You introduced me to a movie that’s left a mark on me. Thank you for inspiring me to share it.

This was a fascinating editorial that one of my good friends, Mr. Lin, shared on Facebook a while ago. Mr. Lin used to be a teacher at my local elementary school, but has since created an impressive career in school administration. He has been an assistant principal and a principal in the Roanoke County Schools, Floyd County Schools, and now in Pennsylvania.

On The Roanoke Times’ website, the caption with the photo I used states: “The first team from Ridgeview High School in Dickenson County to win a state championship was its robotic team in 2018. That team went on to the world championship in Detroit, where it placed 9th out of 64 teams. Our editorial at left looks at how J.D. Vance’s ‘Hillbilly Elegy’ perpetuates negative stereotypes of Appalachia. There’s a different story the region ought to tell, and the engineering skills of students in one of the state’s most rural localities ought to be part of that new narrative.”

Every time I read something new about Appalachia, whether it’s an editorial or not, I always learn new things or discover something different. This editorial was no exception.

When I first heard about Hillbilly Elegy on NPR’s Fresh Air, I was immediately intrigued. I kept telling myself I was going to read it, but here we are, in July 2019, and I haven’t read it yet. Maybe that’s a good thing.

I didn’t realize Ron Howard is planning to make a movie about the memoir, either. I admire Howard immensely. However, I’m hesitant to see it, whenever it is released. I don’t appreciate negative stereotypes, whether they’re implied or not.

Maybe my feathers are ruffled because of my own Appalachian “history.” Much of my mom’s extended family hails from West Virginia. I have fond memories of many family reunions in Ripley and Beckley. I loved visiting my great-grandmother, Laura Bethany Powers, whom I am named after. She lived to be 102!

In addition, I started researching Appalachia on my own in high school and throughout college.

This editorial opened my eyes to the progress that has been made and seen in Southwest Virginia. Since it is the Roanoke newspaper, I understand why they focused on their own region. Still, seeing the positive statistics made me happy, and hopeful.

I still plan to read Hillbilly Elegy, eventually. I have another 15 or so books I want to read first.

But, after I read Hillbilly Elegy, I’ll likely look up the other two books that were mentioned in the editorial:

I found one other part of the editorial to be striking:

“Given all this talent, technology companies ought to be competing to locate in Appalachia, not acting as if it didn’t even exist. These are the stories we need to be telling the world — that we are a topographically-challenged and economically-challenged part of the country that is populated by smart, hard-working people.”

An interesting thought, and that needs to be explored much further.

Al and I watched this movie together. I’m pretty sure we didn’t see it in theaters, since I was still away at college when it was released.

I love Emma Stone, especially in this movie!

If you’re looking for a good laugh, with a modern twist on The Scarlet Letter, this is a great choice. Also, Emma Stone and Penn Badgely are adorable.

Thank you for being with me on this wild ride of Romantic Movies posts!

This is easily one of my top five favorite romantic comedies. I’ve been a fan of Sandra Bullock for what seems like forever. And Ryan Reynolds has built himself one heck of a career as well. This film was also somewhat unique, if not slightly controversial with the immigration angle. However, I love how refreshing this story line is, and how great they are on screen.

If you haven’t seen it, I won’t spoil it. But, if you’re looking for a great story with some awesome laughs, this is the movie I would recommend every time. 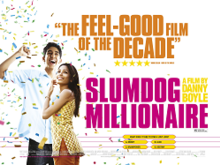 While not technically a romantic movie, this was my first introduction to Indian movies and culture. I enjoyed the blossoming relationship between Jamal (Dev Patel) and Latika (Frieda Pinto). I also love how this movie is based on a true story.

If you haven’t seen it, I highly recommend it. I loved seeing it in theaters. The soundtrack is really cool, too. 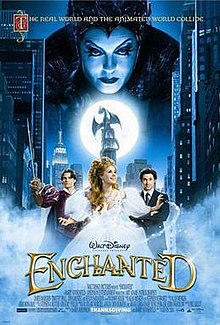 I remember gushing over this movie when it was first advertised. I had the opportunity to travel to Potomac Mills for Christmas shopping right before final exams in December 2007, which was the end of my first semester of college. A bunch of us saw this movie in the mall’s movie theater. I thought it was great!

The cast is awesome, especially Amy Adams and Patrick Dempsey. And the music was excellent. The soundtrack is one of my favorites.

It may be a bit cheesy now, but I love how light-hearted and fun this movie is. I also appreciate how many homages and parodies of Disney movies and characters are wrapped up in this sweet package.