Al’s mom sent this link to me, asking if I’d seen it: Story Behind the Song: The Rainbow Connection

I hadn’t, so I clicked on it. It’s a bit dated now – It was posted in October 2016. However, what I clicked on and witnessed was nearly 12 minutes of magic and appreciation. It was an interview where Paul Williams discusses how “The Rainbow Connection” came to be. In the middle, Williams mentioned his website, Gratitude and Trust, along a post he wrote called “The Elegance of Kindness” about Jim Henson. I paused the video, grabbed a Post-It note, scribbled that down, and continued the video.

Visiting the website a little while later, I noticed that Paul posted it in September 2013. But, dates don’t matter.

As I started reading, all I felt was warmth when I digested Paul’s words. What an amazing life he’s had as a songwriter. He’s also a recovering alcoholic, a major feat by itself. And, to meet AND work with Jim Henson! Wow.

He told the same story in the video as he did in his blog post, about not wanting to throw any surprises at Jim when he and Kenny Ascher were beginning to produce the music for The Muppet Movie (1979).

Jim smiled, and reassured Paul with these words, “Oh, that’s all right Paul. I’m sure they’ll be wonderful. I’ll hear them in the studio when we record them.”

Hearing Jim say that immediately allayed Paul’s fears and worries. He also told this story in the liner notes when the soundtrack was re-released for the nearly 35th anniversary of the movie. And, in a way, this meeting paved the way for one of the most memorable and warm songs that has ever been created.

But the point here is “the elegance of kindness.” As I was telling Al about the video and the blog post, he immediately nodded and said, “Yes, exactly. That’s how many people have described Jim Henson. How kind he was.”

Jim Henson died in 1990. I wasn’t quite two years old when he left the world. But, I’ve learned who he was. And what an impact he has made! In his short 53 years, he became a legend. He created the Muppets, helped develop characters for Sesame Street, produced The Muppet Show, started the Jim Henson Foundation, and founded Jim Henson’s Creature Shop.

I made the same connection that Paul did about Jim. With kindness comes trust. With kindness and trust, magical things can bloom and grow. I don’t think “Rainbow Connection” would have been written if Jim Henson didn’t trust Williams and Ascher. There have been so many issues with trust, time and time again, with the world of entertainment. And it’s not limited to entertainment, either.

I write this post as the pandemic continues. I’m frustrated and appalled at the President of the United States and other leaders who have spouted clear lies, and they have incited great fear among millions of people. Millions of people who have gotten so many mixed messages at the worst possible time. No wonder I have trust issues! And there’s not a shred of kindness from the top. Sadly.

However, my spirit has been renewed. There is kindness, still.

Some Good News with John Krasinski is AWESOME!

I’ve loved Steve Hartman since he started reporting with CBS News in the 1990s (Remember Assignment America? And throwing a dart at a map of the U.S.?). A while ago, he did a four-part series called Kindness 101. Not only are his kids adorable, but he’s sharing many of his stories, old and new, and reminding everyone who’s watching what the important things are in life. Character. Gratitude. Empathy. Optimism. Purpose. I’ve watched all of them, and I’m excited the series is continuing.

Just today, I read a father’s account of his daughter, Emerson, and her letters. Her handwritten letters and decorated envelopes. She wrote a letter to her mailman, Doug, expressing her appreciation for him to help her mail her letters. Now, it’s gone all over the country, through thousands of people and postal workers. I’m inspired to be a pen pal again.

And, I don’t think it’s a coincidence that Sesame Street’s theme is now “Smarter, Stronger, Kinder.” The elegance of kindness can, and should, be embraced as young as possible. But, you’re not too old to start. You’re never too old to embrace something like kindness.

Enjoy a special performance of “Rainbow Connection” from Kermit that posted to YouTube last week.

So, before starting the lists of favorites, here’s my tally for books and Book Reviews for 2019:

Now, on to my favorites!

Well, that wraps up my favorite things for 2019!

What about you? What were some of your favorite things of the year?

alrighty, now to post the official rules for the tag.

1. Link back to the original creator of the book tag

2. Thank the person that tagged you and link to their post. (who tagged me??? IDK! but i do know i saw Marie did this tag and that’s probably where i tagged myself)

3. TAG AS MANY SWIFTIES AS YOU WANT! (Or non-Swifties, maybe inspire them to listen to our Queen)

1. I FORGOT THAT YOU EXISTED: A BOOK THAT YOU WANT TO FORGET YOU EVER READ

2. CRUEL SUMMER: A BOOK YOU TURN TO WHEN THINGS GETS ROUGH

Any of Nicholas Sparks’ earlier works.

5. THE ARCHER: A BOOK WITH GOOD MENTAL HEALTH REPRESENTATION

Mosquitoland, David Arnold. This is easily one of my favorite books of 2019.

6. I THINK HE KNOWS: YOUR FAVE FICTIONAL CRUSH

The Fault in Our Stars.

8. PAPER RINGS – BOOK WITH AN UGLY COVER THAT YOU ABSOLUTELY ADORED

Their Eyes Were Watching God. I was assigned to read it during my senior year of high school.

9. CORNELIA STREET – A BOOK OR SERIES YOU NEVER WANT(ED) TO END

Tie between Harry Potter and The Hunger Games.

10. DEATH BY A THOUSAND CUTS – A BOOK OR SERIES THAT DESERVED A BETTER ENDING

Karrion from Fallible Justice. I reviewed the book as an ARC, so I need to get my hands on a real copy at some point.

12. SOON YOU’LL GET BETTER – A BOOK THAT YOUR HEART WILL NEVER RECOVER FROM

The War That Saved My Life.

13. FALSE GOD – A CHARACTER YOU WOULD LEAP INTO THE BURNING PITS OF HELL TO SAVE

14. YOU NEED TO CALM DOWN – A BOOK WITH A POWERFUL MESSAGE

The Battle of Jericho.

15. AFTERGLOW – A BOOK YOU WANT TO GIVE A SECOND CHANCE

I eventually want to re-read Go Set A Watchman again.

17. IT’S NICE TO HAVE A FRIEND – FAVE FRIENDS-TO-LOVERS STORY

18. DAYLIGHT – IF YOU COULD ONLY READ ONE BOOK OR SERIES AGAIN AND AGAIN, WHAT WOULD IT BE?

I’m tagging Kristian from Life Lessons Around The Dinner Table.

The minute the 50th Anniversary Special was announced, I marked my calendar for November.

I was pleasantly surprised to find the full special posted on the PBS website for a whole week, from November 17th through the 24th. I watched it twice! And I experienced so many emotions!

I really enjoyed the story. Joseph Gordon-Levitt was a great host! And so many former cast members were a part of it. The songs were my favorite part, especially the performance of “Sing” at the end.

I’m planning to get it on DVD when it is released.

I’m going to go out on a limb here, and declare that Mosquitoland is my favorite book of 2019.

I had a feeling this book was special when I found it at Barnes & Noble last year, while I was looking for books to purchase with the gift card I received for my birthday.

I fell in love with Mim, the main character, right at the start. I loved how Arnold addressed mental illness, psychiatric care, and dysfunctional families. I was rooting for Mim the entire time on her journey, which became quite a map of routes, detours, and exits.

I admire Arnold and his creation of his characters. I love how he used music throughout the story. The resounding theme of being on a journey stuck with me the whole time. It was quite a ride.

Arnold is so good with his words and storytelling, that I felt like this story was a mix tape of coming of age, mystery, suspense, a bit of horror, and all of it was delicious. I could hardly tear my eyes away from the book. I wanted to know what happened next.

I found myself a bit surprised with the end of the book. No spoilers — But it was an interesting turn, something I hadn’t considered. It made me like Arnold even more as an author.

I look forward to reading more from Arnold – He has three more books I’m eager to devour.

I wasn’t tagged for this. However, I love everything Kristian at Life Lessons Around The Dinner Table posts. When I saw this on her blog, I wanted to participate, too!

A Song Challenge from Laura Venturini

Rules:
Copy rules and add to your own post, pinging back to this post.
Post music videos for your answers to the musical questions.
Tag two people to participate!

1. Post a music video of a song by an artist popular in the 80s.

Rick Astley – “Never Gonna Give You Up”

2. Post a music video of a song that makes you wanna shake your groove thang!

3. Post a music video of an acoustic version of a popular song.

Thanks for sharing your post, Kristian! You inspired me to get back to the blog after a long 11-day hiatus. Thank you! 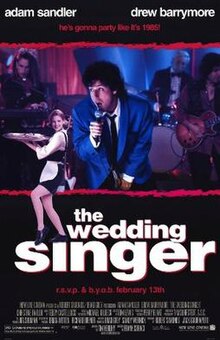 I LOVE this movie!!

In my opinion, this is one of the best 1980s-period movies. Adam Sandler and Drew Barrymore are adorable. And I heard the name “Julia Gulia” for YEARS before I saw this movie in full.

In a way, this movie is still relevant today. There are people who fall in love with others who have certain images or ideals of them, like Linda did with Robbie. However, Robbie finally comes to his senses and recognizes what a good thing, and a good person, Julia is. And that’s part of what makes this movie so endearing.

This movie is easily in my top 10 films now. I’ve only seen it twice, but I plan to watch it more frequently. Like other films, a big selling point for me is the soundtrack. I also love how Billy Idol is involved!