I received this book through a fun gift exchange on Facebook. I’m part of several American Girl groups, and one of them started an Elfster gift exchange last year for Christmas. The group has done it three times since then. It’s been very popular!

I don’t remember ever reading this particular mystery, so I was thrilled to get it!

The book is a solid 171 pages, which is great for American Girl’s target audience of 8 years old and up. Being a mystery, it does have some frightening moments, but it’s also an easy ready, with shorter chapters and a good story.

Set two years after Samantha’s original books, she and Nellie set sail on the RMS Queen Caroline, headed for Europe. Now eleven years old, they want to have fun on the voyage, but are accompanied by a French tutor to help them keep up with their schoolwork while they miss school for two weeks. Along the way, they meet quite a cast of characters. When the legendary blue sapphire disappears, everyone on the ship is a suspect! And Nellie appears to be hiding something as well.

For years, Samantha’s character has been criticized as snobby, stuck-up, and privileged. Her original books are set in 1904, and it’s no secret that her family is wealthy and of high society. However, Samantha is kind, and reaches out to Nellie and her sisters, especially when they realize they have all been orphans due to their parents’ early demises.

This mystery was exciting. The first night reading it, I only made it through the first two chapters before going to sleep. However, the next night, the story was so engaging, I couldn’t put it down. Before I knew it, I had finished the book. I wanted to figure out who the thief was! For a book aimed at young girls, I loved how it was really hard to guess the real culprit. It was like I was playing detective with Samantha and Nellie, navigating the ins and outs of the ship, which was more modest than other ocean liners of the early 1900s.

I was pleased with this book. It has the right amount of character development, conflict, suspense, and mystery. I want to read the other Samantha mysteries now, and go back to re-read her original books, too. 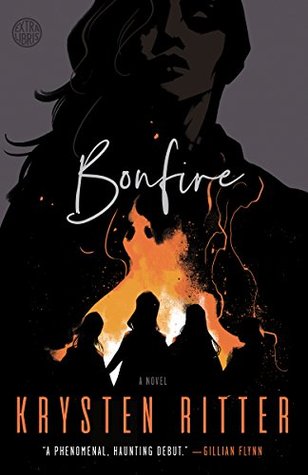 I bought this book from Barnes & Noble for two reasons: (1) The cover, and (2) The author! Known recently as Marvel’s Jessica Jones, I admire Krysten Ritter in many respects. I wanted to see how she wrote a book!

To be completely honest, I nearly DNFed this book around the 50-page mark. It was a good story, but I felt it was moving really slowly. The world-building was good, the characters were good, but it felt like it was moving at a snail’s pace.

One of the things that kept me going was Ritter’s use and creation of fantastic, realistic imagery and scenery. Wow! I felt like I had been dropped straight into Barrens, Indiana, and walking beside Abby Williams, the MC.

I’m glad I stuck with the book, though. It got better. I can’t exactly pinpoint when it got better, but the pace did pick up, and it felt like a rush after that. This book is part mystery, part legal thriller, part psychological thriller. I wasn’t expecting all of that when I started the book!

In terms of characters, Abby reminded me so much of Erin Brockovich, but where she is returning home to investigate the seemingly-stellar company that’s put her hometown on the map and revitalized everything. Seeing her attempt to navigate past relationships with her father, and former classmates, was really interesting.

There wasn’t a huge twist, per se, but I know I didn’t see it coming. I audibly gasped when it struck me between the eyes, as I was reading it on the page. Ritter weaved several story lines together so well, and entangled multiple characters.

I felt Abby was slightly gaslighted, in a way, because she started to believe she was truly crazy, and couldn’t tell fact from fiction. It was tough for me to keep up with and navigate the stories of 10 years prior and her present, but I feel like Ritter did a good job, overall. I was hooked, and couldn’t put the book down at the very end. She also divided the chapters really well, and the flow was great.

It’s not my favorite book in the whole world, but I’m glad I read it. It’s going on my bookshelf. I look forward to see what she writes next.

I first saw this tag on Destiny’s blog, Howling Libraries!

And then I was tagged for it by Sara at The Bibliophagist. Thanks, Sara!

Are You Ready for the Answer?

Let me know your answer in the comments (but no spoilers!)

This was such a fun and unique tag! Thanks again, Sara!

It took a long time to get to this place, let me tell you!

This book was originally a Christmas gift from Al in 2017. I first started reading it in the summer of 2018, and then abandoned it about halfway through.

However, abandoning it started to bother me several months later, so I committed to pick it back up. Finally, after about a month of effort, I finished it!

Part of the reason I abandoned it at first was due to the story structure. Told in reverse, Miranda presents quite a complex set of characters, all trying to piece together the reasons why certain events occurred ten years prior.

The main character, Nicolette, known as Nic, was hard for me to grasp at first. She appears likeable, but as you get deeper into the story, it gets muddled and messy. Almost all of the characters have darkness in their pasts. Some, in their present, too.

On the surface, it’s a mystery story. Everyone in Cooley Ridge, or mostly everyone, is trying to find out what exactly happened to Corinne Prescott ten years earlier. Is she dead? Is she still missing? What the hell happened to her?

Then, just as mysteriously, Annaleise Carter vanishes off the face of the Earth. Everyone is a suspect. And Nicolette is at the center of it all.

This was not my favorite book in the world. It was a good idea, a decent mystery. Once I finished reading it, I started to better understand why I originally abandoned it. Nicolette was a tough main character for me, and it was almost too much trying to keep up with everyone else in her world. There were too many people involved in the story, and it got muddled and confusing from the first chapter. And maybe that was part of the point? To make it confusing to add to the story.

However, I’m glad I stuck with it. Miranda did a good job building the world of Cooley Ridge, and made the past and present blend together well. At the same time, I feel like she tried to accomplish too much in one novel, her debut for adults. I felt exhausted after just 1-2 chapters in a night, and struggled to read more than that in one sitting.

If you’re a fan of suspense and solving mysteries, this is a good read to try when you’re on vacation, or wanting a different book to read. Other than that, it’s a challenge for me to recommend it higher.